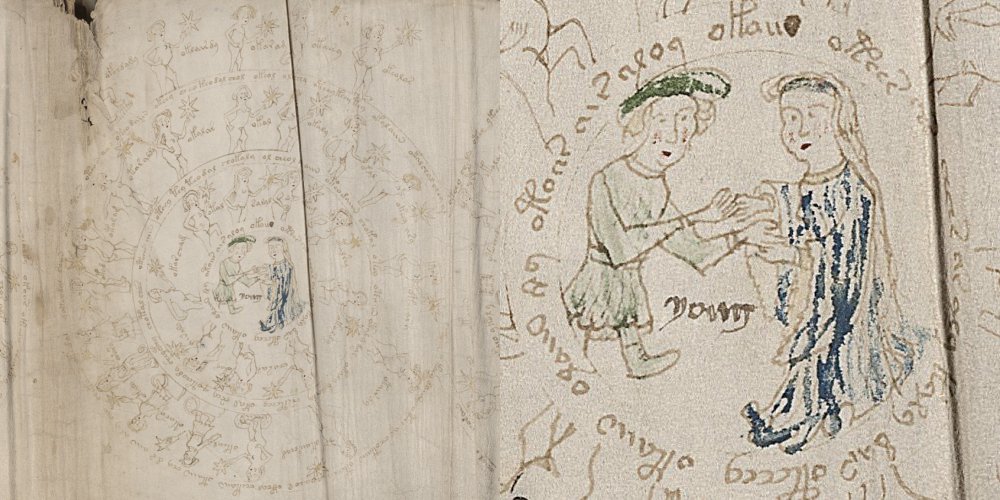 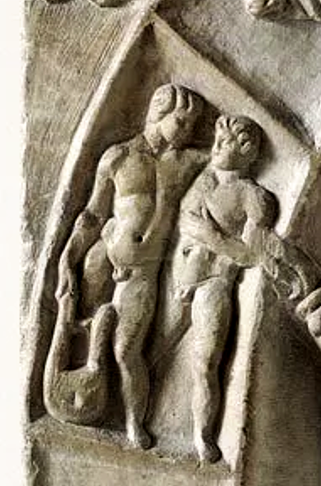 Others have called them Hercules and Apollo; some, even Triptolemus, whom we mentioned before, and Iasion, beloved of Ceres – both carried to the stars”.

* Colum Hourihane: “Gemini is always represented by the twins, for the month of May (modern horoscopes align it to May 21 – June 20). The two figures can be shown full-length or as busts and are usually in a landscape. They can both be male or female or one of either sex. They can be fully clothed or nude. They can also appear in the guise of lovers and are sometimes shown touching each other on the breast or the face. They are particularly reminiscent of Adam and Eve when they are shown in a garden surrounded by foliage, and he may hold an apple in his hand towards her. In one example their modesty is covered by a large fig leaf (Morgan Library, M.264 fol 5r). Often related to the twins Castor and Pollux, it is clear that some examples are directly based on male twins. Some examples show them as not quite nude – as when they have a piece of transparent gauze over their middle (Morgan Library, M.262 fol 5r). They are frequently shown as two conjoined figures with one set of legs and one trunk but two heads (Morgan Library, M.700 fol 6r, M.64 fol 5v). In a number of other cases their middles are covered by a heraldic shield (Morgan Library M.283 fol 3v, M.440 fol 3r)”.

“On the right side of this capital , Gemini are incarnated by Adam and Eve. Traditionally represented by two naked male figures and the like, kissing or holding hands, Gemini sometimes take the appearance the original couple – [Footnote 76:] from the thirteenth century, Gemini is becomes the pretext for a scene of courteous love, as a positive replacement of the original couple. This is the case at <a href=https://commons.wikimedia.org/wiki/File:Zodiaque_Amiens_03.jpg>Notre Dame in Amiens</a>, on the foundations of Saint-Firmin portal (circa 1220-1230), or even at <a href=https://commons.wikimedia.org/wiki/Category:Right_portal_of_the_western_facade_of_Notre-Dame_de_Strasbourg#/media/File:Zodiaque_05_Gemeaux.jpg>Notre Dame in Strasbourg</a>, on the foundations of the statues of the south portal of the western façade (1280). “

In Indian astrology, Gemini are called “Mithuna” (the Lovers). “Astrology and Religion in Indian Art” by Swami Sivapriyananda provides a 1790 AD example of the Indian iconography. It is not clear if images like this were also produced in earlier periods and in other countries (e.g. Persia). 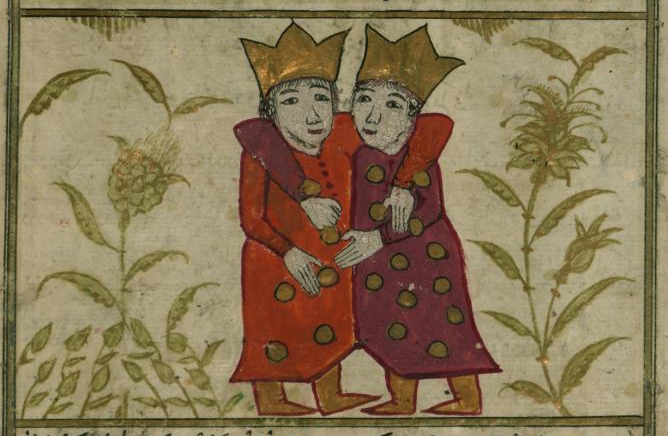 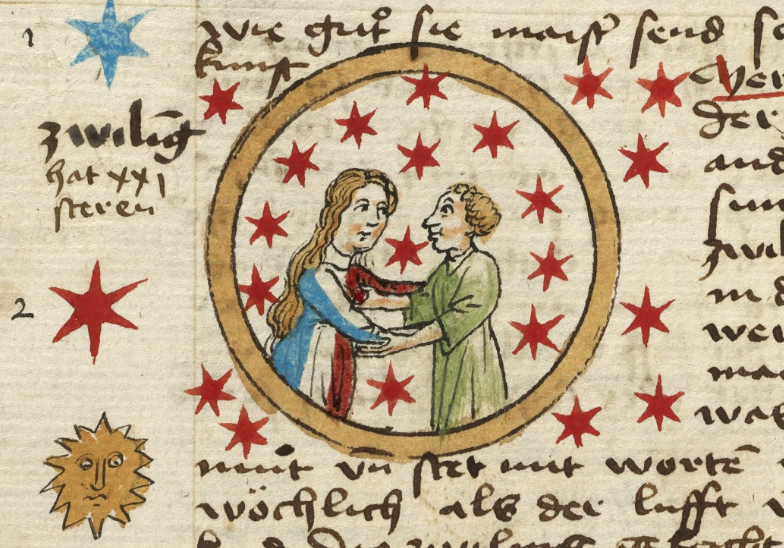 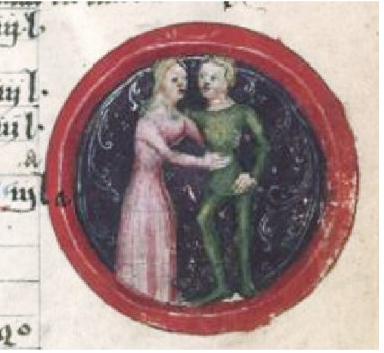 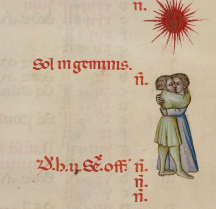 Lund Astronomical Clock or Horologium mirabile Lundense, was made around 1424 probably by the clockmaker Nicolaus Lilienveld in Rostock.

Heidelberg Cod. Pal. Germ. 7 is a “lot book” (Wahrsagebuch or Divination Book), a simple and popular form of divination whose only link with astrology is the frequent and arbitrary use of astrological terms and imagery. Although the man appears on the left and the female twin, on the right, is wearing draped fabrics these are about the only similarities with the VM. 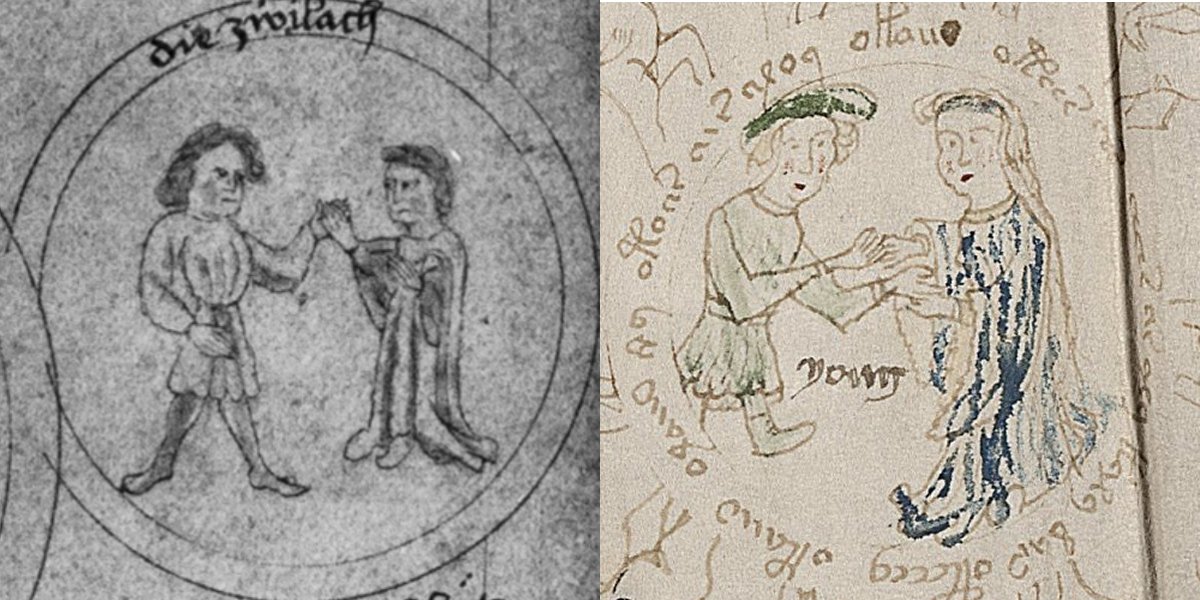 The manuscript description on the Warburg Iconographic database is incomplete (it merely says it’s a Latin translation of al-Sufi), however, a better description of its contents can be found here.

An interesting article about the Children of the Planets was earlier posted on these pages (by Marco). It seems plausible that the VM Zodiac may be related to this popular German Renaissance “children of the planets” astrological motif.