——————–
In this report I suggest a possible reading for a text label found on f77v. This follows on from a 2015 post on the same topic (here) that I now believe to be incomplete. I also speculate on what this might imply for the identity of Voynichese.

The text label under-disussion is shown bordered in red in the image below Pokémon Giratina nds. It accompanies a diagram of the male genitals. Importantly, also depicted within the same image is a pregnant female figure. I believe that this pregnant female figure is critical to correctly interpreting the meaning of this text label. 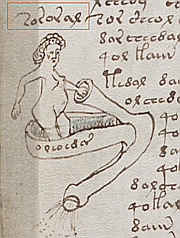 There are slight variations in the possible readings of this word. Here are the variants from published EVA transcriptions:

I would interpret this word as being composed of a root verb (sara- or sora-) with a gender, tense or plural suffix (-rul).

Previously, I suspected this word maybe related to the Arabic “sararat” for jetting out water (fountain) or perhaps the Persian “shasha” for urine, exudation [ref: Dictionary of Persian, Arabic, English; Johnson]. However, this interpretation fails to explain the pregnant female figure.

However, whilst researching the origin of the root “s-r-” for “flow, stream” (ref : here I identified what I consider to be a better set of matches 대차대조표 다운로드.

Better matches are provided by words found in Semitic languages (Hebrew/Amharic/Arabic/Syriac) that have meanings relating to conception, which aligns well with both the image of the pregnant female figure and the male genitals.

For example, here are examples of related terms in several modern languages. (You can hear some of them being spoken using Google translate.)

It would therefore appear that the text label (EVA:sororal → sararul) is describing either conception, or a related term like seed, seminal fluid, ejaculation or offspring. Specially, the root of this word (EVA:soro- read as “sara-”) appears to be related to the word for “seed” in Semitic languages.

I also considered similar terms in other languages,for example, there are similar terms in Sanskrit 플렉스 빌더 다운로드. However, these words do not relate to conception or pregnancy, suggesting a weaker link with Sanskrit.

I also gave thought to the possibility that this word might be related to the Latin verb serō. However, this does not fit as well with the phonetic transcriptions.

In conclusion, I propose that the label above the male genitals and figure of a pregnant women, [EVA:sororal -> “sararul”] means “to seed” (conceive). Furthermore it would appear that Voynichese has similarities to Semitic languages (Hebrew/Amharic/Arabic/Syriac) or contains borrowings from them. 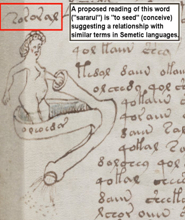 This identification also demonstrates that it is possible to make meaningful identifications using the transcriptions described by Prof. Bax in his 2014 paper.

It also informs us that text labels do refer to the accompanying images.

Finally, on a more speculative note, I wanted to discuss what Voynichese might be, based on this evidence Holy Spirit.

Of the languages described above, both Hebrew, Arabic and Syriac are written from right-to-left. Only Amharic, like Voynichese, is written left-to-right.

It is interesting to speculate that Voynichese might be related to Amharic, the official language of Ethiopia. There was some cultural contact between Ethiopia and Europe in the early 15th-century when the Voynich manuscript was written, for example, four Ethiopian monks attended the Council of Florence in 1441. However, what is perhaps more interesting is why Amharic switched to being written left-to-right: it was due to the influence of Greek.

This historical example of a switch in written direction, suggests that when a Semitic language is influenced by another language that is written from left-to-right (eg 그대 떠나가도 다운로드. Greek, German or Latin etc.), this might provide the conditions to reverse its normal written direction. Such conditions could have possibly re-occurred amongst Hebrew speakers in Europe (by Jews right across the European continent), or amongst Arabic-speakers in Europe (in medieval Spain or Malta).

We must also remember that Hebrew, Arabic and Syriac are living languages, however, there were other now-extinct languages spoken in the European and the Arabian/Mediterranean region. I think another good candidate language for Voynichese might be the language of the Sabians. This group of people lived in the region around Harran and Edessa (in modern day Turkey close to the border with Syria) until the 11th-century when the populations were dispersed following Muslim expansion into this area azpr. Contemporary Muslim sources refer to Sabians as Syriac-speaking pagans and Greek immigrants. (ref : Gündüz, The Knowledge of Life, p.131-32).

Centuries earlier, many important Sabian astronomers, astrologers and mathematicians were to be found living in Baghdad. I’m inclined to think the Voynich manuscript is likely a “summa”, a compendium of knowledge of various topics including astrology. For this reason I find a link with the Sabians to be plausible. I’m also mindful of the fact that the Kitab al-Bulhan or Book of Wonders (late 14th-century) a manuscript probably bound together in Baghdad contains Voynich-like symbols zenly 다운로드.

Texts based upon the works of Sabian writers were circulating in Europe at the time that the Voynich manuscript was created, for example, the Sabian astronomer/astrologer-philosopher Thabit ibn Qurrah (826-901) is named in one of the important astrological texts of the period – the Picatrix. Thabit’s native language was Syriac, which was the eastern Aramaic dialect from Edessa, and he was fluent in Greek and Arabic too. Latin translations of his astrological works continued to be widely copied into the 15th-century. Its perhaps, not too much of a stretch of the imagination to think that a Sabian manuscript might have survived in a copied form. There was a great interest in unusual manuscripts in the 15th-century, and collectors travelled widely collecting and copying unusual manuscripts TVToday.

One other possible explanation for the identity of Voynichese is that it represents an attempt to write Judaeo-German (Yiddish) or a now-extinct form of Judaeo-Czech (Knaanik) using a novel alphabet. I find both these possibilties plausible, especially the latter, since Voynichese shares many common characters also found in Latin abbreviations and medieval Czech. Furthermore, a significant number of parallels have been reported between the Voynich Zodiac symbols and similar depictions found in other Central European manuscripts from the same time-period. The earliest known history of the Voynich manuscript places it in Prague and its earliest known owner, Jacobus Horcický de Tepenec (Sinapius) (1575 – 1622), was born in Borenovice in Moravia. Both these locations had local Jewish populations, and this might have provided the opportunity to write a regional Jewish-Moravian/Bohemian dialect in a left-to-right direction.