In this post I would like to highlight some intriguing research carried out and sent to me by Andrés Eloy Martínez Rojas, president of la Sociedad Astronómica Urania (SAU) in Morelos, Mexico, relating to folio f68r.  This illustration shows what he is suggesting as an interpretation: 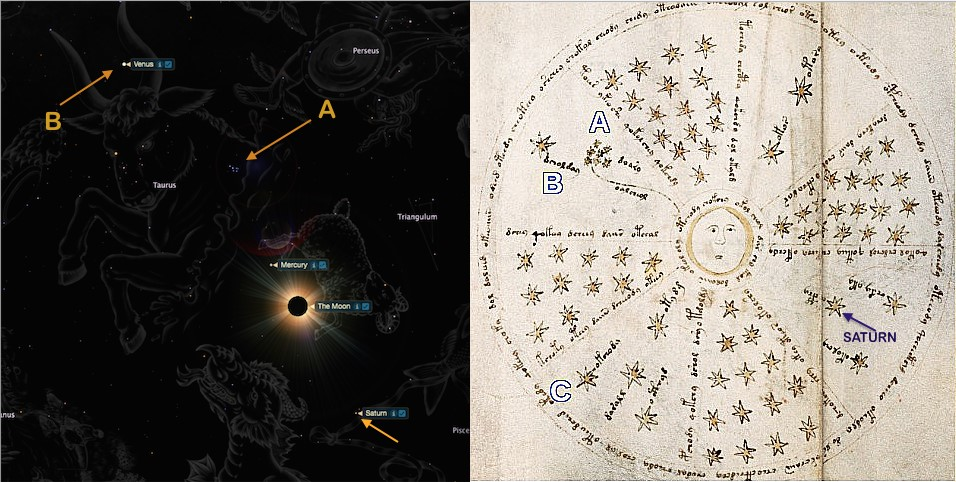 You can find a report in Spanish here from a Mexican newspaper and also a rather sketchy and dismissive blog report by Klaus Schmeh in English here.

In essence, Andrés offers the suggestion that the folio in question depicts an annular eclipse of the sun that occurred on April 15th 1409 –  in other words an event when the Moon covers the Sun’s centre, causing the Sun’s visible outer edge to create an apparent “ring of fire” or ‘annulus’ around the Moon. The event of 1409 was, according to Andrés, visible at its maximum in the north of Europe, and as a partial eclipse in other parts of Europe.

Andrés makes a number of interesting points to support his suggestion:

b) the sun on 15th April 1409 would have been in the constellation of Taurus, which is where the Pleiades or Seven sisters are situated (hence the seven stars in the Voynich drawing) – see the place marked A in the images above

c) this theory explains the clear yellow colouring around the moon in the centre of folio f68r, which would depict the ‘ring of fire’

d) if this is true, then the large bright star depicted in the Voynich illustration to the left of the seven stars could be Venus, which would have been very bright at that moment  – see B in the two pictures above

e) by similar logic, given that Saturn would also have been very bright at that moment, he suggests that one of the stars of the three opposite, in the Voynich diagram, might be Saturn YouTube search results. He suggests the middle one, though I am not sure why.

f) the zodiac images of Aries in the Voynich manuscript (here and here) have 15 days in each, and might link with the date of 15th April

g) Andrés has sent me the image below, with the suggestion that the arrows he has marked in the diagram across the three Voynich pages :

“seem to suggest a convergence in possible annular eclipse of the sun, which according to my proposal corresponds to April 15, 1409.”

h) Finally, Andrés has another suggestion: “the only astronomer who studied the eclipse of April 15, 1409 was the Byzantine astronomer Jean [Johannes] Chortasmenos, who was the copyist of the Juliana Anicia Codex of Dioscurides,  strangely similar to the codex Voynich”, and he wonders if Chortasmenos might be behind the Voynich manuscript as a whole?

So what can we make of these ideas?

Klaus Schmeh in his blog report is rather dismissive. This is what he says:

“….is Martínez Rojas right? I don’t think so. The astronomical interpretation of the rosette on the first picture doesn’t look very conclusive to me Sybil Action. Of course, this might be due to the fact that I simply don’t understand what he means, but I’m still not very impressed.”

But why be dismissive if you haven’t looked into the details, and if you admit you don’t understand it? Surely it is better to be open minded? So let’s consider Andrés’ suggestions one by one:

a) the date matches the carbon dating. Ok, that in itself is not conclusive, but it is better to match than not to match. The carbon dating is one of the few firm things we know about the manuscript and it is a very brave or foolish person who goes against it 윈도우 7 순정 다운로드.

b) the sun on 15th April 1409 would have been in the constellation of Taurus. See this page for details of the annular eclipse of 1409. It seems to say here that the sun would have been in Aries, so I am not sure how that fits with the Pleiades.

c) this theory explains the clear yellow colouring around the moon in the centre of folio f68r, which would depict the ‘ring of fire’. This for me is the most interesting part of the argument. The moon is clearly circled in the Voynich illustration with a clear yellow ring around it, and this calls for an explanation Mozilla download. So far as I know, this one is the best we have been offered. [Addendum: however, maybe the yellow just signifies the moon, as it is used elsewhere in the manuscript around the moon?]

d) the large bright star depicted in the Voynich illustration to the left of the seven stars could be Venus. Yes, it could be, but we need more evidence (e.g. by decoding the word beside it 🙂 ). But Andrés’ discussion serves a useful purpose in reminding us that that bright star might not necessarily be Aldebaran as is often assumed, so other candidates are worth investigating, including Venus.

e) one of the stars of the three opposite in the Voynich diagram might be Saturn. I find this a weak suggestion. If there were only one bright star in that position in the Voynich manuscript, then it might be convincing, but the fact that there are three does not support the Saturn idea where your brother is.

f) the zodiac images of Aries in the Voynich manuscript with 15 days in each might link with the date of 15th April. This again is weak to me, as it suggest that the author of the manuscript carried this point about the annular eclipse into other parts of the manuscript, and the evidence for that is weak.

g) Evidence across the three pages to suggest the convergence: Again this is weak to my mind, because if the author had wanted to show that relation between the three pages, surely s/he could have drawn it in? I am not convinced by that.

h) Jean [Johannes] Chortasmenos as the possible author of the Voynich manuscript. So far as I know this person has not been suggested previously as a possible author of the Voynich (and I hope Diane will tell us if I am wrong!).  On the surface his claim is as good as any 애니 플러스 다운로드. Wikipedia does not have a page for him in English, surprisingly [Correction, it has one here, but it is sketchy], but the French one tells us he was an astronomer, copyist, mathematician and scholar, so he could have been as likely as any other. But of course there is no good evidence for it.

So in summary, there is a still a lot of evidence needed to substantiate the ideas which Andrés has put forward, but they should not be dismissed out of hand. In particular, I feel that Andrés deserves commendation for offering an interesting idea which at least offers a good explanation of the yellow corona and stimulates thought and investigation 윈도우7 익스플로러8 다운로드.

Andrés is generous in offering me credit for the identification of the word translated as ‘Taurus’, but that possible identification had been made long before me, so my work deserves no part or credit in what Andrés has proposed. Klaus Schmeh further misrepresents the situation when he says about the diagrams above:

“A” seems to refer to the alleged Voynich solution of Stephen Bax (which has never been accepted by the Voynich community). According to Bax, the word below the “A” means “Taurus”, while the stars left of it represent the Pleiades.

Klaus has packed so much confusion into two sentences I don’t know where to begin, except to say how sad it is that people read and write so carelessly web apk 다운로드.  Errors as follows:

i) Andrés never said that ‘A’ refers to my work. He said it refers to ‘Taurus’ which others had identified before me.

ii) I never said that my work offered a “solution” to the Voynich manuscript – the clues are in the title of my long paper; my suggestions were  “provisional and partial”, and it is sad that apparently intelligent people misrepresent what I said.

iii) There is no such thing as ‘the Voynich community’. There are, in my experience, at least three distinct groups who talk about the Voynich manuscript:

Sorry, Andrés, but you will be attacked a lot by Group 1. I just hope that Group 2 and 3 will at least look at your suggestions with an open mind, and will investigate them further!

I, for one, am grateful for your work and hope you yourself will continue to investigate it with an open mind – and not end up in Group 1 like so many before you 산돌고딕 다운로드!