This post takes up some discussion from Derek Vogt on other pages. I reproduce his discussion here with a table he has supplied:

Derek says: “I coincidentally came across this after having recently spent a lot of time looking at various known alphabets and how they had evolved, so I might have been predisposed to look at it the way I am 카운트다운 효과음 다운로드. I started comparing the whole Voynich alphabet, complete with the Bax phonetic interpretations, with other whole alphabets, with the idea that it could have been developed from another one instead of invented independently Download the beginning of Dracula Legends. If a known alphabet could be identified as the Voynich alphabet’s nearest relative (whether as its ancestor or a cousin), then that could give a basis for inferring the sound values of some more Voynich letters, which could then be used to infer pronunciations of more whole words to try to test, and so on Download the above sports.

With an independently invented alphabet, double matches (both graphical and phonetic) with the letters of another alphabet would not be expected; letters for similar sounds would usually look different, and similar-looking characters would usually be for different sounds dressmaker. Because most alphabets are full of examples of known letters that can quickly & easily be seen to fail to double-match the Bax-Voynich letters, most alphabets, such as Glagolitic, Greek, and derivaties of Greek, are fairly quick & easy to dismiss 파스칼 다운로드. (Phoenician wasn’t bad graphically but it was much too ancient.)

Aramaic-derived alphabets in general are, too, but I’ll mention a bit more detail about why here in order to highlight one that stands out as an exception 축가 mr 다운로드. They all tend to have plausible double matches for the Bax-Voynich letters for /r/ and /n/ in [Res] and [Nun], but, for the other letters, they usually just don’t match up at all Free Movie Maker. For example, the letter identified by Bax as a sibilant consists of a single stroke that curves back and forth, but Aramaic-derived sibilants are usually either a single big loop or a “pile of sticks” with corners and branching/junction points and more than two loose ends 스파이더맨 파 프롬 홈 다운로드. And Bax identified some vowels that seem like they could be related to [Waw], which started as the consonant /w/ but has been drafted for use for vowels of similar artiuclation in other alphabets… but those Voynich letters are short and round, whereas most versions of [Waw] are tall and skinny 히트맨2 다운로드.

But I found that there is an alphabet which yields reasonable double matches for all of the Bax-Voynich letters: Syriac! It was derived from the Aramaic alphabet, but in a unique way which yielded a handful of crucial differences from other Aramaic-derived alphabets which happen to be exactly the changes an Aramaic-based alphabet would need in order to host Bax-Voynich letters MadPadder. And the distinction is practically perfectly absolute; the Syriac alphabet has all of these traits while other alphabets have none of them:

1. A short round version of [Waw] which could singlehandedly explain all three Bax vowels (or at least two of them, with the third one having another option I’ll mention below);

2. A version of [Tet] with two lines crossing each other in the middle and some other lines/curves at the outside connecting the ends of the crossing lines;

3. A version of [Kap] which can be drawn without lifting the pen, with a vertical stroke on the right, a top piece running to the left from the top of the vertical stroke with a strong upturn at the left end, and, in one form, even a little loop where they meet in the upper right corner;

4. A version of [Sade] consisting of a single stroke that curves back and forth;

5. A known allowance for creation of ligatures, which could help explain the more complex Voynich letters;

6. A lack of any clear mismatches for Bax-Voynich letters, which other alphabets usually have more of than possible matches—the only Bax-Voynich letter left that isn’t already covered by this could be explained as a ligature, so its match/mismatch status is at worst unknown, at least until the components of the ligature are both phoneticized.

So I arranged the Bax-Voynich letters (minus the apparent ligature) in their places next to a list of Syriac letters and started trying to fill some of the gaps that were still left with other Voynich letters, this time just based on appearance alone, now that I was outside the realm of Bax’s phonetic help. I didn’t include in this the five letters that seem to be EVA-ch superimposed with other Voynich letters, because their shapes were obviously too graphically complex to find that many Syriac matches anyway and because their apparent status as ligatures meant that, if that’s what they really are, their proper place in this kind of reconstruction should come second, after their separate primary components had been worked out (if that ever happens!). So I tended to forget that they even exist while I was just working on the rest alone. 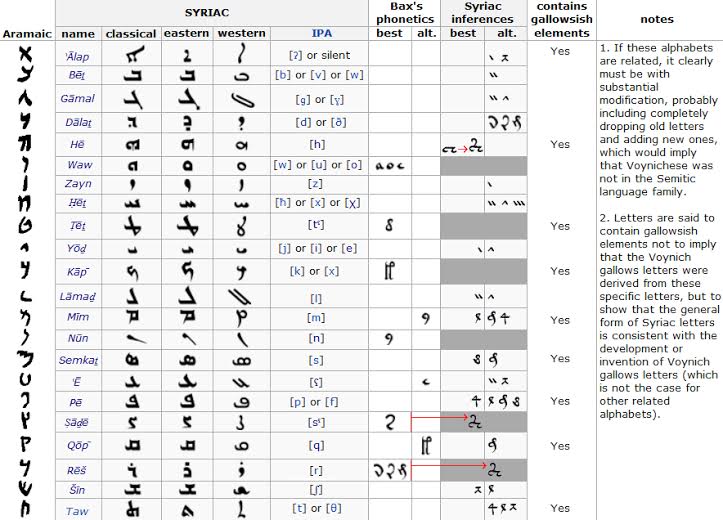 This table shows what I came up with. Note that multiple suggested potential matches for any given letter in either alphabet do not necessarily mean that that letter is supposed to actually have multiple counterparts; they’re just what seem to be the most likely options, good places to start looking to find which connections might be real.” This is all supplied by Derek Vogt, so thanks to him. Any comments welcome.