In a previous post I proposed a set of 64 star labels in the Voynich manuscript which seem most probably to represent the names of actual stars (or planets or asterisms). These are essentially only those on three pages of the manuscript, known as f68r1, r2 and r3. I excluded  from consideration many more star shapes in the manuscript on the grounds that they might not in fact be meant to refer to stars, and that any analysis should be cautious in this respect 구글 플레이어 스토어 다운로드.

Having established this core list, I assigned each item a number, and presented the numbered diagrams on three separate pages so that you can see them and so that we can start to make progress with identification:

This now allows us to look at patterns. If we start with the initial letters of the 64 items, we see that the overwhelming majority (40, or 70%) begin with EVA sign o. A substantial proportion begin with EVA ot (16 = 25%) or with EVA ok (12 = 19%). The full table is here. Below the table I start to consider what this might imply about the meaning of the Voynich names Iron Man 3.

What can we make of these statistics concerning the Voynich labels?

The source of star names in Europe and the Near East

It is useful at this point to take into account research into how the names of stars originated, were transmitted and were altered, from earliest times to the 15th century, in Europe and beyond modernizr 다운로드. A significant expert in the field is Paul Kunitzsch, some of whose works you can see here, and in the discussion which follows I will refer mainly to P. Kunitzsch, T. Smart: A Dictionary of Modern Star Names (Sky Publishing Corporation. 2006).

As these authors point out, the star names in Europe came from a range of cultures, from the Babylonians, Greeks, Romans and so on, but of we consider the situation in 15th century Europe and the Near East, the probable area in which the manuscript was created, it is clear that the main transmission came via the Arabs. The process was by no means neat and tidy. In considering star names it is crucial to bear in mind the following:

“[In Spain] primarily, in the 10th to 13th centuries, works on sci-A astronomy, astrology, and instruments, including theAlmagest (as well as books on alchemy, mathematics, medicine, and all else), were translated into Medieval Latin or Old Spanish 옵티마 폰트 다운로드.

But it was a disunified process. The Arabic sources were of course exceedingly diverse, both in content and orthography. Also, the work of transferral (again a combination of translation and transliteration) was done by authors in different places and at different times. Often the work was done with the help of an Arabic speaker who was interpreting a source according to his own peculiar dialect. Different versions of many of the books were produced, and even the use of Latin was varied in its grammar and orthography during this period Oracle 10g express download. There were copying errors (all books being tediously hand-copied), mistaken transfers of names, and some erroneous translations or misinterpretations of names. With such disunity in the stellar nomenclature, there was bound to be confusion for whomsoever in the future attempted to sort the subject out.”

This will become important at later stages when we start to try to identify the star names (a process which others on these pages have begin already). There is a huge amount of variation in how the star names are written and transmitted. If the author of the Voynich manuscript borrowed any names at all, which seem highly likely, we should therefore expect to see that variation making its way into Voynich star names also 인텔 블루투스 드라이버 다운로드.

Kunitzsch and Smart (2006), and Kunitzsch also in other  of his works, offer a coherent and authoritative guide to the ways in which star names were transmitted from ancient times, and they summarise it in this diagram. The key time period to look at in respect of the Voynich manuscript is from around 500 AD. 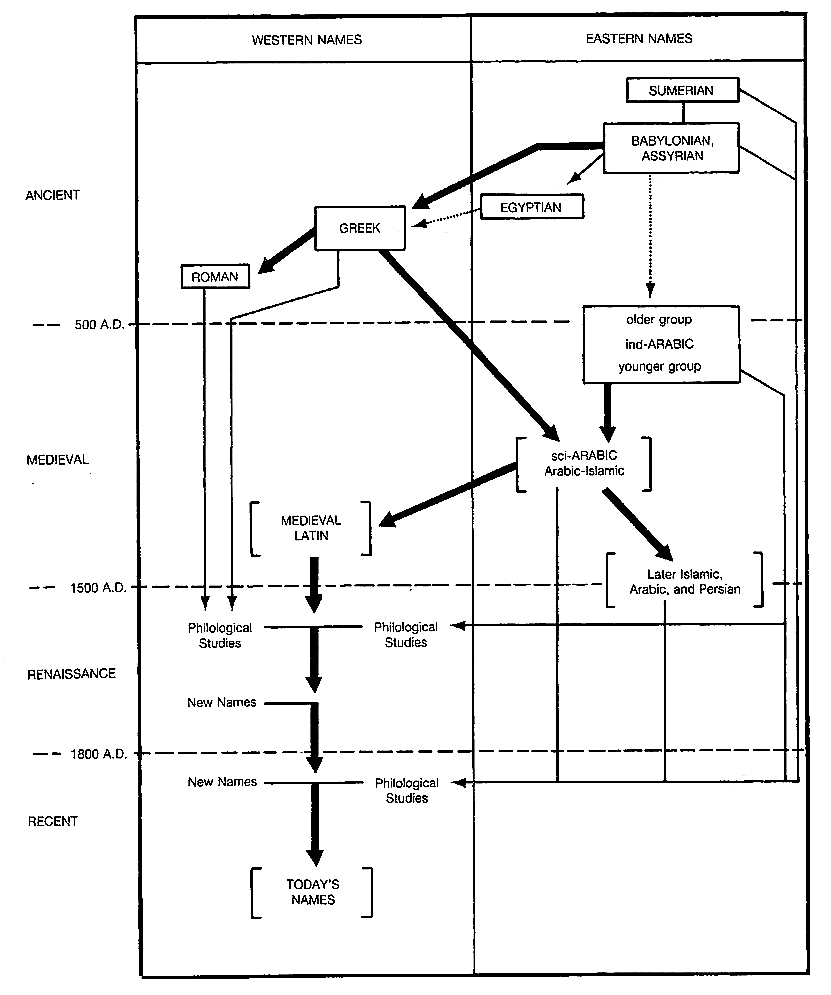 The key point they make is that from around 500 AD onwards in Europe, the influence of Arab writers, drawing of course on Greek, Babylonian and others, was enormous 리눅스 에서 파일 다운로드.  AFTER 1500, European scholars rediscovered ancient sources directly, but BEFORE 1500 all mediaeval European star naming practices were filtered through from Arab sources.

A further point which can be deduced from Kunitzsch and Smart’s analysis is that there was NO OTHER source of star names of any influence at all at that time in Europe and the Near East. Furthermore there are no known independent traditions of star naming, i.e. any which did not draw on Arab sources.

This is important because if the Voynich manuscript was created in Europe or the Near East, as seems likely (see discussion here), then at that time and place there was no star naming tradition available to the authors except the one derived from the Arabs 뭉쳐야 찬다 3회 다운로드. Also, it is highly unlikely that the Voynich authors could or would have evolved their own name for the stars independently of the Arabic tradition, since so much of the manuscript obviously follows European thinking.

The upshot of this to my mind is that, given this evidence of the Arab influence on star naming at the time, and the statistics I have set out above, the initial letter EVA ‘o’ must be analysed as an /a/ sound, which matches what I have already argued in previous analyses (see my Feb 2014 paper).

The reason for this is the influence of the Arabic definite article /al/ which is present in significant numbers of Arabic star names (see a list here) 샤이니 초연 다운로드. In the case of many Arabic star names the /l/ sound is elided into the following letter, depending on whether that following letter is a ‘sun’ or a ‘moon’ letter (see explanation here). A good example is Al Debaran, which was frequently elided into Adebaran because the letter ‘d’ is a sun letter.

To my mind this is pretty incontrovertible. I cannot see any other way to explain the statistically high number of initial EVA ‘ot’ clusters at the start of the star labels we have identified, given the history of star naming in Europe and the Near East at the time the Voynich manuscript was written.