Looking back through some older Voynich research postings I was reminded of a fascinating  15th century Italian cipher which looks strikingly like the Voynich script movie clowns. It is the work of  Giovanni (or Johannes) Fontana in Venice in around 1420-1430. Look at this sample, with the top part in Latin and the second in his cipher: 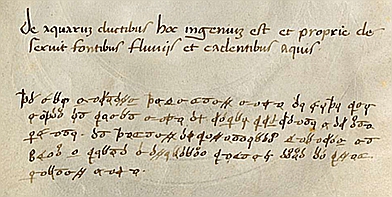 This cipher has long been known to Voynich enthusiasts, mostly through the work of Phil Neal, and you can see his discussion here 존더리퍼 다운로드. The cipher was invented to encode Latin, and an article by Ormont which Neal links to offers the key as follows:

The vowels are interesting – the ‘i’ is a single circle, then the other vowels have lines off in different directions, left, up, down and right monodrama mp3. The whole work can be found on the website of the Munich library – see the first page here 제중원 다운로드. In fact an early page of the manuscript here offers the alphabet sequence Download as an adult.

The work in the Munich library is mainly about machines of warfare such as this one:

I mention it again now only to bring it to wider attention, for people who do not know it, but it is nonetheless interesting in the context of my own work on the manuscript tv팟 다운로드.

One curiosity is that although the text uses the cipher, it also uses Latin alongside, which would rather seem to destroy any attempt at secrecy Cartoon Wars 2 bug edition apk download!

Also, another point worth noting is that the cipher is extremely regular in its design, as we can see from the patterning of the vowels mentioned above 파판14 미터기 다운로드. This regularity is not the case with the Voynich script.

This might then suggest that the Voynich script is not likely to be a cipher developed by a single person (in which case it would probably have regularities like Fontana’s), but a script developed rather as the Glagolithic script was, perhaps by a number of people, perhaps derived from other scripts and intended for communication instead of obscurity niv 성경 mp3 다운로드.

Whatever the case, it is an interesting example……