This post has been kindly provided by Marco Ponzi

A possible Indian parallel for f68r3

The first three volumes of the monumental History of Cartography published by the University of Chicago Press can be freely downloaded in PDF format.
Volume 2, Book 1, Chapters 16 (1992) was written by Joseph E. Schwartzberg and is devoted to “Cosmographical Mapping” in South Asia. The artifacts described include a pair of large cosmographic paintings that are displayed in the Meenakshi Hindu temple in Madurai (Tamil Nadu, India): fifty years old copies of ancient, possibly XVI Century, originals 우분투 최신 버전 다운로드. The first painting is a circular world map (Bhugolam). The second, which is discussed in this page, illustrates the celestial dome (Khagolam) and is reproduced in the volume (Fig.16.19).
According to “The Hindu” newspaper, the two original cosmological paintings and their modern copies were restored in 2008, but it was not possible to find better images of the diagrams or any kind of additional information on the subject.

The painting illustrating the celestial dome presents some aspects that can be compared with Voynich diagram f68r3. This parallel should be considered with caution for several reasons including the fact that the date and place of origin of the Madurai painting are far from those of the Voynich manuscript 표적지 다운로드. Schwartzberg admits to be “unable to interpret this painting with confidence,” but his analysis seems to be careful and, in many respects, straightforward.

Schwartzberg’s analysis
Even if the quality of the picture in the PDF version is low, the author provides a number of additional details: “it seems safe to assume that the male and female figures seated in the center of the painting represent the sun and the moon, respectively, and that the wheels for the planets occupy the relatively light space between the more central and more peripheral groups of concentric rings. Radiating outward from the center of the diagram are twelve spokes that may be described as like hour divisions of a clock. Presumably these are the divisions between the twelve zodiacal months Show Me the Money 8 6. … The snakelike figure extending upward from the center and somewhat to the left to just beyond the outermost planetary ring I take to be Rahu, the causer of eclipses. Its open jaws appear about to swallow up the sun and the moon. Also extending upward from the center, through the light field of nine encompassing rings and slightly to the right, is a thick band that looks like a river, which perhaps represents Ketu. Rahu’s tail is tethered by seven (count not certain) fine lines (not discernible on the photograph), connected to various wheels (grahas? [i.e. the planets]) 동물원 혜화동 mp3 다운로드. All but one of these lines terminate in the upper half of the painting. … A final feature of note in this exceedingly complex cosmography is a gold pavilion at the very top of the wheel, possibly the abode from which Brahma observes his creation and regulates the mechanics of the entire cosmos”.

The identification of the “snakelike figure” with the eclipse dragon seems reliable, in particular because the monster appears to be devouring the sun and the moon. In Assyrian sources, the eclipses are attributed to seven demons, that included a snake and a dragon (The Eclipse Dragon on an Arabic Frontispiece-Miniature, G Waterloo. Azarpay, 1978). When the astronomical nature of the phenomenon was understood, the lunar nodes (i.e. the points in which the orbit of the moon intersects the ecliptic) were identified with the head and the tail of the imaginary dragon. In Indian culture, the head and tail of the eclipse dragon (Rahu and Ketu) were assimilated to the the real seven planets, bringing the total number of the planets to nine (the Navagraha).

With respect to Schwartzberg’s analysis, it can be observed that the “thick band that looks like a river” is unlikely to represent Ketu (the descending lunar node), since the head and the tail of dragon are always separated by exactly six zodiac sign (i.e 움직이는 바탕 화면 다운로드. they are at opposite points of the ecliptic) but the distance between the “river” and the “snake” is only about 45 degrees. This band could possibly correspond to the Milky Way.

Comparison with f68r3
When comparing the Madurai painting with Voynich f68r3, the following correspondences can be identified:

The following are some of the aspects in which the Madurai painting differs from the f68r3 diagram:

Voynichese labels for the curved line and star cluster
The possibility of a link between Voynichese and Indian languages has been discussed several times on this blog (for instance in Stephen’s discussion about the place where the manuscript was produced). Also the identification of the curved line in f8r3 with the eclipse dragon has been discussed on this site: in the Persian tradition the dragon was known as Gochihr or Gozihr, a name derived from an earlier form “gao-čithra” or “gau-čithra”. The Arabic names “al-jawzahar” / “al-gauzahar” derive from the Persian. The Arabic name was sometimes Latinized as “geuzahar” or “geuzaar”, but typically, in Latin sources, the Lunar nodes were just called caput and cauda draconis (the head and tail of the dragon) 팟빵앱 다운로드.
According to the phonetic system developed by Derek Vogt as an extension of Stephen’s research, the label near the curved line EVA:oalcheol reads “awshõas”. Derek judges significant the agreement between the Arabic and Persian names and his phonetic reading.
In most ancient sources, the eclipse dragon is represented as a dragon or snake (as in the Madurai celestial dome), not as an abstract curved line as that appearing in f68r3. The cluster of seven stars has often been identified with the Pleiades and the label EVA:doary with the Latin name of the Taurus constellation (as proposed by Rene Zandbergen and other researchers, including Stephen in his 2014 paper in which also the Arabic form “thaur” is discussed) Download bluetooth device driver. This identification allows a direct phonetic mapping for the Voynichese label. It would be interesting to know the orientation of the Madurai diagram: is the dragon represented in the area corresponding to Taurus? Unluckily, Schwartzberg’s discussion is too brief to cover this level of detail.

The parallel between the Madurai painting and f68r3 could suggest an alternative interpretation of the seven stars labeled EVA:doary: they could represent the seven planets, or five planets (Mercury, Mars, Jupiter, Venus, Saturn) and the two lunar nodes. An association of the eclipse dragon with the planets is also stated in Zoroastrian texts that (differently from most Western traditions) present all the planets, with the exception of the Sun and the Moon, as evil (Zoroastrian Astrology in the Bundahisn, Mac Kenzie, 1964) jquery attachments. The identification of the cluster of stars in f68r3 with the planets has been independently proposed by some researchers, see for instance this post by user “VoynichViews” on the Voynich Ninja forum or this recent post by Elmar Vogt. As far as I can tell, EVA:doary does not seem to be linked with a word designating the planets in any of the major languages that have been considered (Latin, Greek, Persian, Arabic, Sanskrit), but possibly further research might suggest viable candidates. The seven stars as the Big Dipper
Along with the possible interpretations of the seven stars as the Pleiades or the planets, it is worth mentioning a third possibility, unrelated with the Madurai painting: the seven brighter stars of Ursa Major (the Big Dipper) are often taken as a symbol of the North. As discussed in the forum thread mentioned above, the Latin Septenptrio for North originally meant “seven oxen” referring to those seven stars. Also in the Zoroastrian tradition, Ursa Major had a prominent role and a name derived from the numeral seven (Haftorang). A Spanish manuscript in which one of Ursa Major or Ursa Minor is used a symbol of the North has been previously discussed on this site. The top-left sector of the f68r3 diagram could correspond to the cardinal direction North, and the “curved line” could possibly be interpreted as the Draco constellation, which is also close to the Northern celestial pole. See for instance how Draco is represented at the center of a sketch by Thomas Betson, 1500 ca, which has also been previously discussed on this site. Of course, in most ancient illustrations, the Draco constellation (like the eclipse dragon) is represented as a reptile. Under this interpretation, the label of the star cluster could denote the Big Dipper constellation or simply the North (as “Tramontana” in the Italian ms Morgan M.721, which features a ten stars constellation). It should be noted that the arrangement of the seven stars in f68r3 is different from the actual shape of Ursa Major. 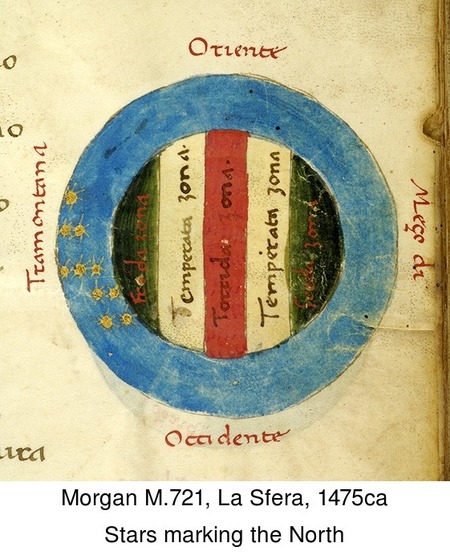