I am setting up this post to get discussion of the fascinating ‘Bathing’ or ‘Balneological’ pages of the Voynich manuscript (Quire 13, folios 75r – 84v). 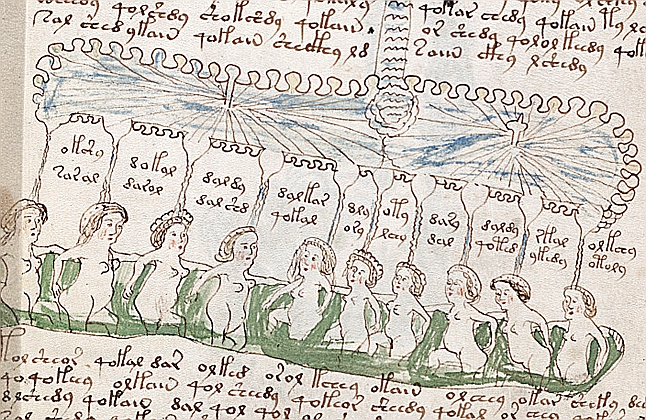 I also want to raise awareness of an interpretation of these pages which I think is interesting and well-argued, namely the one by Lincoln Taiz and Saundra Lee Taiz which you can find on page 19 of the Chronica Horticulturae, Vol 51 , Number 2 , 2011  Download aix openssh.

In that article they argue that in these pages “the author depicts a philosophical scene in which women represent vegetative souls located within the very marrow of the plant, driving the processes that make plants grow and reproduce” (p22)

Elsewhere on this site Marco Ponzi has recently made another suggestion about these pages which I will also reproduce here for convenience, also for comment. Marco says:

“This web page by P Han presents (among other things) an analysis of f80r, the bathing queens 내 pc 지키미 다운로드. At the center of the top illustration, we can see a “nymph” who wears a flower crown and seems to be coming out of a bathtub.

P Han compares the central Bathing Queen (Nymph #6 from the left) to ancient images of Venus Anadyomene: the identification of the subject as a water goddess is a possibility, independently on linguistic considerations. The nymph is labeled EVA:opor reading Apar (or ^abar^, following Derek’s phonetics). I think this confirms the idea we discussed with Derrenthat the label EVA:opoey on Voynich f86 / Rosettes O T map (an possibly EVA:opcholdg on f68v3) could be related with the Zoroastrian sacred water Aban/Apas star use map. Nymph #6 likely is a personification of Aban.

Nymph #4 is labeled EVA:okolo, reading Akasha (the fifth element of Hinduism and Zoroastrianism, as Stephen discussed here). She wears what appears to be a jewel tiara. Jewels are among the attributes of Buddhist personifications of Akasha (Akasagarbha) Download The Divine Quiz Reboot 15.

I also find the couple on the right interesting: Nymph #9, who wears a flower in her hair and has her hands tied behind her back, seems to he held captive by the Man 카드뉴스 템플릿 다운로드. They are facing towardsApar. I tried to collect a set of random ideas for an embryonic explanation of this scene. I am sure that none of the following stories is exactly the one illustrated in this page.

The scene seems to me somehow similar to some Mesopotamian seals (eg ME 103317) 김건모 사랑해 다운로드. From the British Museum description:
“Cuneiform documents dating from the early second millennium BC describe how Ea, god of water and wisdom, held the Tablet of Destiny, a cuneiform tablet on which the fates were written and gave supreme power to its possessor. According to these accounts, Ea decides to bathe, and removes his crown, clothes and tablet. Anzu steals the tablet but the hero god Ningirsu defeats the monstrous bird and recovers the tablet 튀어나와요 동물의숲 다운로드. This serpentinite seal appears to show Anzu (shown as a bird-man) brought as a prisoner before Ea.”

I propose the following parallel:

A related Avestan myth exists: the bird Kamak steals all the water from the world. He is defeated by the hero Karshasp. ”When Kamak appeared he spread his wings over the whole world, all the rain fell on his wings and back into the sea, drought struck the earth, men died, springs, rivers and wells dried up” Download 2 with movie God.

But the beautiful and floral Nymph #9 is very different from these monstrous bird demons.

Another possible parallel can be found in Botticelli’s Allegory of Spring. The central character is Venus. On the right, the personification of the West wind Zephyr is kidnapping Chloris, a nymph closely related to Flora (the goddess of flowers), who stands nearby Download Coco Dubbing.
A possible Avestan relative of Flora and Chloris is Anahita, also associated with flowers (and so a possible match for Nymph #9).

The rape of Persephone / Proserpina also comes to mind.
The myth of [U]kur is a Mesopotamian variant: A dragon. He abducted Ereshkigal and became ruler of the underworld with her. He was killed by Enki and Ninurta but his body had held back the primaeval waters and now a flood threatened. The situation was saved when Ninurta built a wall to hold the waters back. The Man labeled Akur could correspond to Ukur.

In conclusion, I would tentatively say that the illustration is related to a myth about fertility, rain and season change (at least, these seem to me the common traits of the parallels mentioned above).”

Any views or comments welcome, on the Taiz and Taiz analysis or on Marco’s discussion, or anything else related to these pages.