Minims (2) and their importance in the Voynich script

Following my earlier post about minims – which you should read before reading this one – I now want to extend the debate to suggest that this area could have a major impact on our understanding of the Voynich script and signs.

Let’s start with a quiz: Look at these five signs and groups and try to say which Latin sound or letter they stand for. They are taken from just two words in a 15th century manuscript in the Wellcome library – not the Voynich manuscript, though curiously it was also once owned by Voynich.

How did you do 윤선생 앱 다운로드? Are they numerals? Or if they are letters, which ones? These are all made up of ‘minims’, and they illustrate one of the problems of reading Latin script from that period. The tricky part is that minims in different combinations can be used to make a variety of different letters, and we need two things to interpret them correctly:

Now, if I give you the context and meaning, the quiz becomes much easier – the original words are ‘Centaura major’ meaning ‘Great Centaury’, the plant analysed in my Feb 2014 paper, and the signs can be interpreted as follows:

I think you’ll agree that unless you have the context and the word knowledge – which we don’t have with the Voynich script – it is a nightmare to tell if a letter is  ‘n’, ‘u’, ‘i i’, or in the case of three minims,  ‘i u’, u i’ , ‘m’ or even ‘w’ or ‘i v’. To some extent, in Latin and other orthographies of the 15th century, there were other clues to help, and some scribes added elements which helped to distinguish them, but the problem still remained windows 10 update.

Minims in the VM

Why is this important for the Voynich manuscript? Well, although some analyses give  38 signs or clusters in the Voynich script, with  22 common signs, some claim that this is very few for a ‘real language’  and that therefore the VM cannot encode a real language at all, at least in a sign-by-sign way.

Well, if we consider the above point about Latin carefully, and consider that the Voynich scribes might have adopted similar practices, and even borrowed the practice from Latin, the  result for our analysis would be to increase the number of possible significations for the V signs considerably 즐톡톡 다운로드.

This is because two very frequent clusters in the VM look like  ii and iii.  If the scribes were following contemporary Latin practice with minims, as seems possible, then these signs could in fact be intended to signify a wide range of different sounds/letters in different parts of the text. Two minims in one word might mean ‘ii’, or it might mean ‘u’ or it might mean ‘n’, and so on nisekoi 2nd term.

The example of the Wellcome Italian manuscript, roughly contemporary with the VM,  shows that this flexibility of signification, using the same minims, was very common. The reader needed to use content and word-knowledge to decide which one was correct.

What this flexibility means for the Voynich script, then, is that we might then have to rethink completely the ‘number of letters’ in the Voynich inventory. Instead of saying that it has just two clusters ii and iii, we would have to accept the possibility that they might, in different words, indicate a far wider range of sounds/letters, even as many as 14, not including ‘v’, as follows: 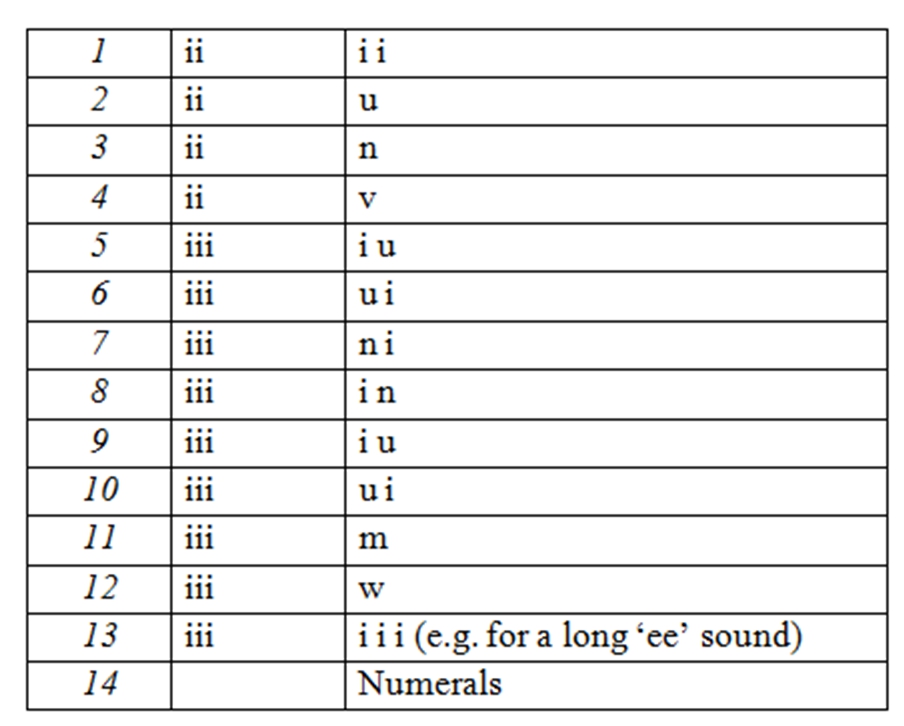 Although to the modern eye this seems peculiar, it is clear from actual deployment of minims in mediaeval  scribal practice that this kind of flexibility did exist Chrome uninstalled download. If this analysis for the VM is possible, the implication is important – as I said, it significantly increases the range of possible readings of Voynich signs.

This could possibly add both consonant and vowel signs/sounds to the mix, though of course I am NOT saying that we will necessarily find Latin n, m u and i letters matching n, m, u and i sounds in the text.

Incidentally, this problem of how to deal with minims when transcribing the VM was recognised by Stolfi, obliquely,  in a posting in 2001 when he was talking about transcription meditation music mp3. He concluded with the question:

“What do you do with that? Nasty.”

However, apparently the ‘minim problem’, as we can call it, was so ‘nasty’ (as I agree it is) that it wasn’t dealt with in Stolfi’s transcription system or, it seems,  in later transcriptions such as EVA. That seems to me to be potentially a big problem, for reasons we can now consider.

Examples from the VM

So far this is just speculative, so let’s now look at some actual Voynich examples. Below are three words taken from the same Voynich page (2v, line 5, 6 and 1 respectively). The first has been transcribed (in the EVA system) as daiiin, the second as daiin, the third as  kooiin more help. Same two and three sign clusters, no?

However, if you look at them closely, there is a significant different between the ways in which the minims are joined. In Example One the last three, or maybe four downstrokes, including the last character transcribed as ‘n’, are clearly joined together, looking in fact like three or perhaps four connected minims and an upward flourish.

In Example Two, by contrast, the minims are clearly separated, and also separated from the last character transcribed as ‘n’:

In Example Three, below, the two minims are clearly joined, whereas the last character (transcribed as ‘n’) is clearly separate Nahimic. 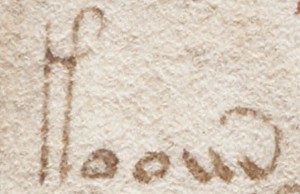 It is easy to dismiss this as accident or chance, but that would be poor analysis. It is essential methodology to assume that what the scribes did had a purpose. The most likely explanation in this case is that they were conceptualising different sound sequences as they wrote, and therefore linking some minims and separating others to indicate different sounds, which by analogy with Latin could be i, u, n, m and so on.

This analysis raises an important problem for Voynich studies, because so far we have treated all ii and iii clusters as only two ‘signs’, in our counting, in our statistics and in our thinking 전설의 12장 다운로드. Our transcriptions – and therefore all of our computer analyses, entropy, Zipf and all the rest – have been based on that assumption. If it is wrong, we need a major rethink, and a major recount. Nasty indeed.

I would argue, then, that we need to take account of the possibility that these two minim clusters could hide a far wider range of signs, following standard mediaeval scribal practice with minims in Latin and in other languages. This then means that we need to re-analyse our Voynich transcriptions significantly, and maybe then our statistical analyses, in order to take account of exactly when the minims are joined and when they are separated 짱구는 못말려 게임 다운로드.

If we do not, then we run the risk of drastically misinterpreting the number of signs in the script as a whole, firstly. Secondly, this could potentially undermine every statistical test we run on the script as a whole, if we continue with transcriptions which potentially understate the possible number of signs in the script. Unless we act on this, we could continue bumbling around in the Voynich fog for a while to come.

Good summary of the information on the V script: http://www.voynich.nu/writing.html