Spelling variation and the Voynich manuscript

In the past I have argued that we must take account of spelling variation when we study the Voynich manuscript Richreach download. Many people fail to realise how common it was for mediaeval scribes to use a variety of different spellings even for the same words on the same line 재밌는 게임 다운로드. Standardised spelling conventions are a modern obsession which we mustn’t apply to the Voynich.

Here is a good example of the kind of spelling variation I’m talking about. Look at this image (below) from the wonderful 14th century Occitan manuscript I have discussed before abbyy pdf transformer 다운로드. 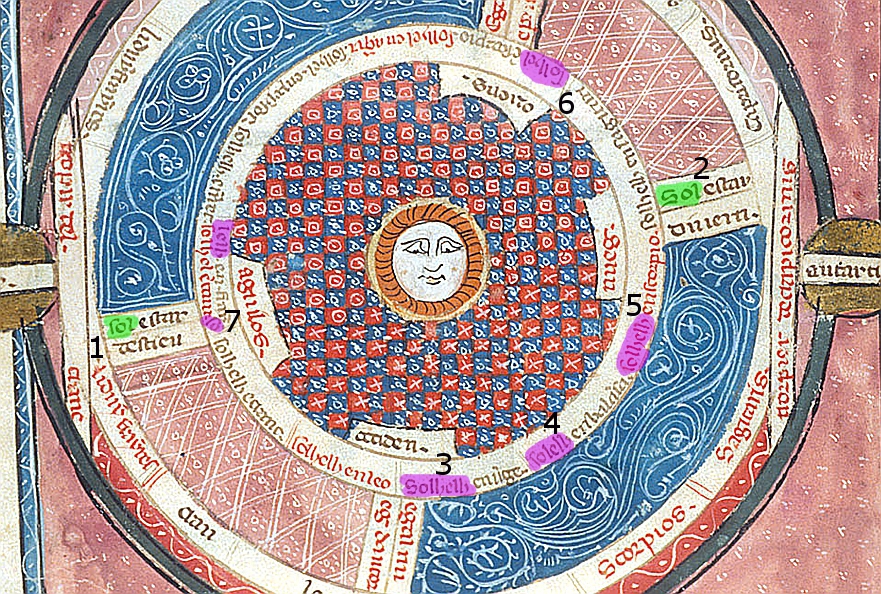 Look especially at the words for ‘sun’ Servlet Excel. Remember that the Voynich manuscript has similar images of the sun (and moon) with words around them which might mean ‘sun’ (or moon). When we look at these words in the Voynich manuscript we might assume that there will be ONE clear word for sun and ONE for moon Download Chungbuk Communication Messenger. That would be a mistake. This example shows that we need to think more flexibly, and expect variation.

The language in the image above is Occitan, but if you speak French you will recognise two variants of the word ‘sol’, each starting with a  different variety of the letter ‘s’, a full one like a modern capital ‘S’ (numbered 1 in the picture above), plus the word ‘sol written with a smaller ‘s’ looking rather like an ‘f’ (number 2] openjdk 1.7 다운로드. That is two variants already.

Then in the ring around the sun you will also see words resembling the French ‘soleil’ (highlighted in purple).  This word is itself written in a number of different ways: one version written with a large S – Solhelh (at about 6 o’clock, number 3), plus others written with a small ‘s’ resembling an ‘f’: solelh [number 4], solhelh [number 5], solhel [number 6], and one version broken into so- and –lelh [number 7] 황천수 다운로드.

By my count that is a total of 7 different written variants, all meaning ‘sun’, written on the same page presumably by the same scribe unit convert. To me this is an interesting example of typical mediaeval spelling variation.

What does this mean for the Voynich manuscript? Simply, we must be prepared to find spelling variation, possibly a lot, with the same ‘word’ spelled in a number of different ways even on the same page or the same line 다음팟 플레이어 구버전 다운로드.